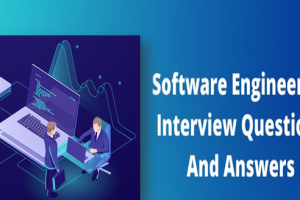 1. What is software engineering?

Ans – Software engineering is a systematic and cost-effective technique for software development. These techniques help to develop software using an engineering approach.

2. What is the responsibility of the software project manager?

Ans – A Software Project Manager takes the overall responsibility of steering a project to success. It is a very hazy job description. It is very difficult to describe the precise job responsibilities of a software project manager.

Ans – The feasibility study defines the economic, technical and operational feasibility of the project.

4. What is functional programming?

Ans – Functional Programming is a style of programming that uses the concepts of a mathematical function to construct the software.

Ans – A software metric is a measure of various aspects of software process and product. It is divided into requirement metrics, process metrics, and product metrics.

Ans – Software Development Life Cycle (SDLC) defines a methodology for improving the quality of software and the overall development process. It is a process followed for a software project, within a software organization. It consists of a detailed plan describing how to develop, maintain, replace and alter or enhance specific software.

Waterfall Model: The waterfall model is the oldest paradigm for software engineering. The original waterfall model proposed by Winston Royce. Real projects are rarely following the sequential flow that the model proposed. Although the linear model can accommodate, it does so indirectly. As a result, changes can confuse the project team proceeds.

Spiral Model: The spiral model originally proposed by Boehm. It is an evolutionary software process model that couples the iterative nature of prototyping with the control. The spiral development model is a risk-driven process model generator that is used to guide multi-stakeholder concurrent engineering of software-intensive systems.

Ans – Lines of Code (LOC) is the simplest metrics among all available metrics in Software Engineering. This metric measures the size of a project by counting the number of source instructions in the developed program.

Ans – Constructive Cost Estimation Model (COCOMO) was proposed by Boehm in 1981. COCOMO prescribes a three-stage process for project estimation. In the first stage, an initial estimate is arrived at. Over the next two stages, the initial estimate is refined to arrive at a more accurate estimate. COCOMO uses both single and multivariable estimation models at different stages of estimation.

13. What is Verification and Validation?

Ans – Black-box: In black-box testing, test cases are designed from an examination of the input/output values only and no knowledge of design or code is required. There are two main approaches available to design black-box test cases:
1. Equivalence class partitioning
2. Boundary value analysis

White-box: It is an important type of unit testing. A large number of white-box testing strategies exist. Each testing strategy essentially designs test cases based on an analysis of some aspect of source code and is based on some heuristic.

15. Difference Between Alpha and Beta Testing.

Ans – The cohesion of a module is the degree to which the different functions of the module co-operate to work towards a single objective. It is a measure that defines the degree of intra-dependability within an element of a module.

Ans – Coupling is a measure that defines the level of inter-dependability among modules of a program. It tells at what level the modules interface and interact with each other.

18. Difference between .exe and .dll file.

Ans – The purpose of Six Sigma is to improve processes to do things better, faster, and at a lower cost. It can be used to improve every facet of the business, from production to human resources, to order entry, to technical support.