Normalization is a process of simplifying the relationship among data elements in a record. It replaces a collection of data in a record structure by another record design which is simpler and more predictable. It converts E-R model into Tables or Relations. There are mainly six types of normalization in Database.

In DBMS, There are mainly six types of normalization:

Example: An Employee table is given below:

If a table, all non-key fields are fully dependent on the whole key then it says Second Normal Form (2NF). It means that each field in a table must depend upon the entire key, they don’t depend upon the combination key, they are a move to another table on whose key they depend. The structure which doesn’t contain combination keys is automatically in the Second Normal Form.

Example: A Student table is given below:

The non-key attribute is: age
2NF Student table, We break into two tables is given below:
1. student_details table: 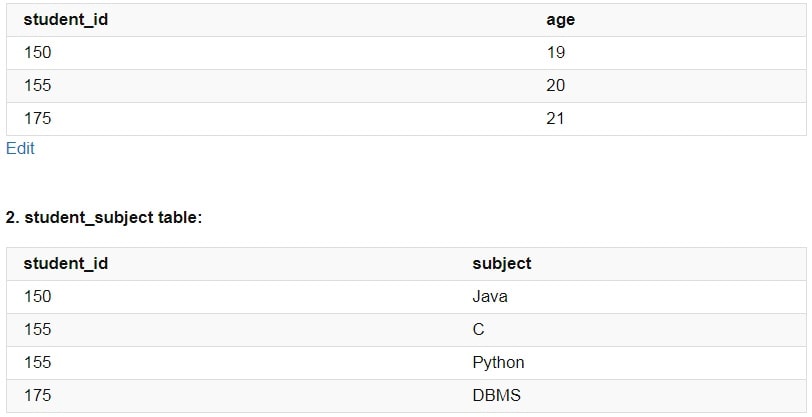 If a table, all non-key fields are fully independent of all other non-key fields then it says Third Normal Form (3NF). A relation is in third normal form (3NF) if it holds at least one of the following conditions for every non-trivial function dependency X → Y.


Example: Student table is given below:

Candidate Key is: {student_id}
3NF Student table, We break into two tables is given below:
1. student table: 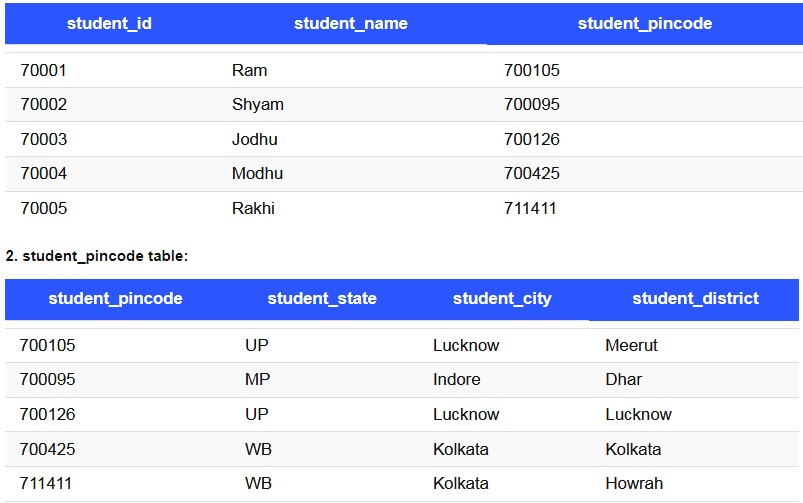 Boyce Codd Normal Form (BCNF) was introduce as an extension of the Third Normal Form (3NF). But it is much more strict than 3NF that means every relation in BCNF is also in 3NF. A table is in BCNF if every functional dependency X → Y, X is the super key of the table.

Example: An Emp Details table is given below:

Here Candidate Key is: {Emp_id, Emp_Dept}
Emp Details table, We break into three tables is given below:
1. Emp_Country table: 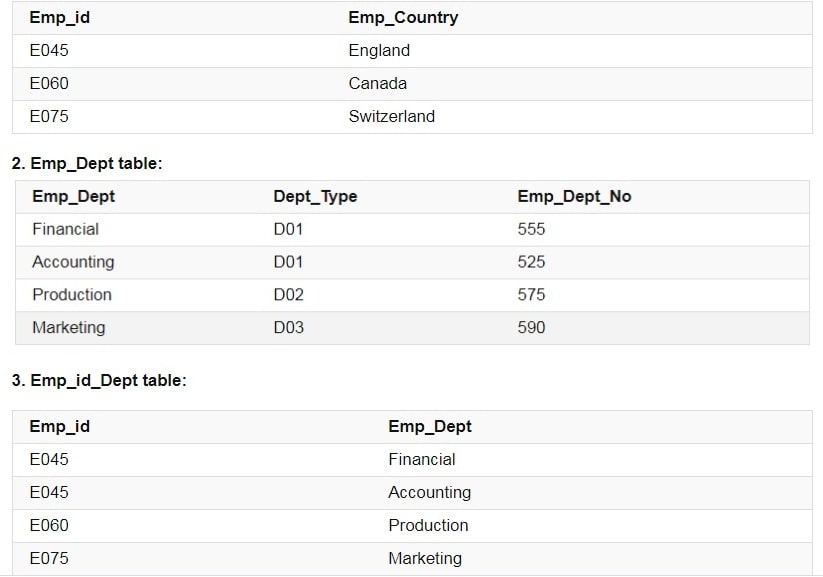 Fourth Normal Form was introduce as an extension of Boyce Codd Normal Form. It eliminates in which the composite key of a record type contains two or more data items that are independent, multivalued facts of an entity.

Example: An Emp table is given below:

The given Emp table is in 3NF, but Emp_Dept and HOBBY are two independent entities. Hence, there is no relationship between Emp_Dept and HOBBY.
So, we make the above table into 4NF, We break it into two tables as given below:
1. Emp_id_Dept table: 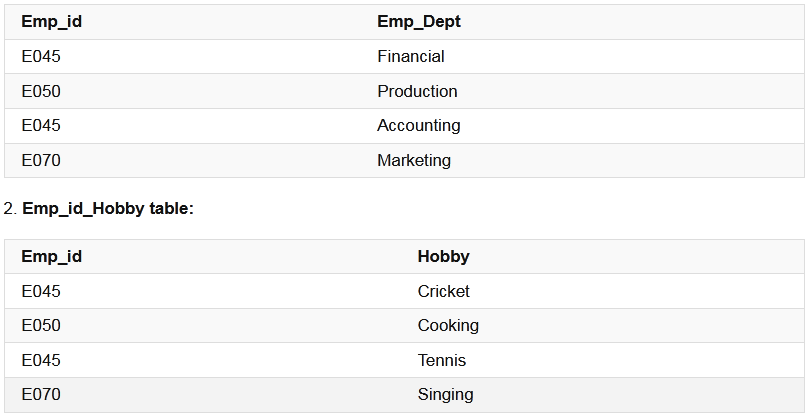 In DBMS, Join dependency is a generalization upon the concept of multivalued dependency. A relation is in Fifth Normal Form, if it is in 4NF, it won’t have lossless decomposition into smaller tables.

The idea behind Domain-Key Normal Form is to specify the ultimate normal form that takes into account all possible types of dependencies and constraints. It doesn’t exhibit insertion and deletion anomalies. DKNF is “If every table has a single theme, then all functional dependencies will be logical consequences of keys. All data value constraints can express as domain constraints.