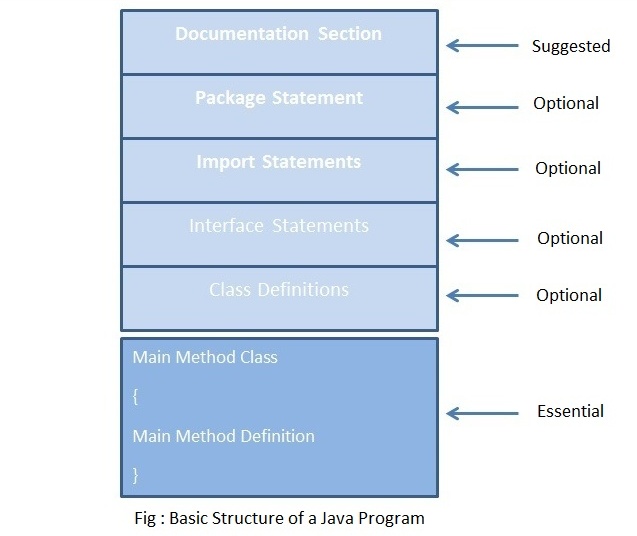 The documentation section comprises a set of comment lines giving the name of the program. The author and other details which the programmer would like to refer to at a later stage. Comments must explain the why and what of classes and how of the algorithm. This would greatly help in maintaining the program. Java also uses the third style of the comment /*....*/ known as documentation comment. This form of comment is used for generating documentation automatically.

The first statement allowed in a Java file is a package statement. This statement declares a package name and informs the compiler that the classes defined here belong to this package.

After a package statement may be a number of import statements. It is similar to to the #include statement in C.

An interface is like a class but includes a group of method declarations. It is an optional section and it is used only when we wish to implement the multiple inheritance features in the program.

A Java program may contain multiple class definitions. Classes are the primary and essential elements of a Java Program. These classes are used to map the objects of real-world problems. The number of classes used depends on the complexity of the problem.

Every Java standalone program requires a main method as its starting point, this class is the essential part of a Java program. A simple Java program may contain only this part. The main method creates objects of various classes and establishes communication between them. On reaching the end of the main, the program terminates and the control passes back to the operating system.