Raster Scan Display basically employs a Cathode Ray Tube (CRT) or an LCD panel for display. The CRT works just like the picture tube of a television set. Raster Scan Display viewing surface is coated with a layer of arrayed phosphor dots. At the back of the CRT is a set of electron guns (cathodes) that produce a controlled stream of electrons that says electron beam. The phosphor material emits light when struck by these high-energy electrons. The Architecture of Raster and Random Scan Display Devices Diagram is given below: 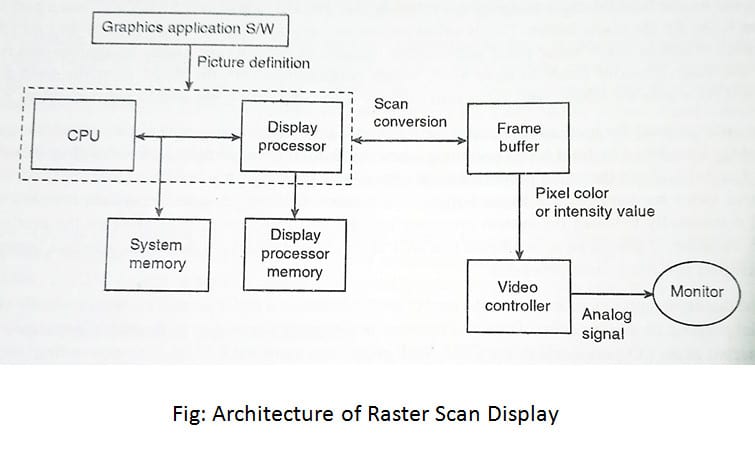 The frequency and intensity of the emitting light depend on the type of phosphor material uses and the energy of the electrons. To produce a picture on the screen, these directed electron beams start at the top of the screen. It scans rapidly from left to right along the row of phosphor dots. They return to the leftmost position one line down. It scans again and repeats this to cover the entire screen. The return of the beam direction to the leftmost position is one line down that says Horizontal Retrace. 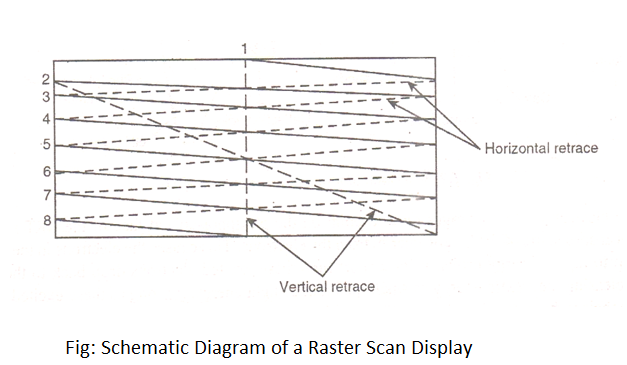 In Random Scan Display, the electron beam direct straightway to the particular points of the screen where the image is producing. Random Scan Display generates the image by drawing a set of random straight lines. It is much in the same way one might move a pencil over a piece of paper to draw an image. The drawing strikes from one point to another, one line at a time. That’s why this technique also says Vector Scan Display.

No bit planes are containing mapped pixel values in the vector systems. Instead of the Display Buffer memory stores a set of line-drawing commands along with endpoint coordinates in a display list or display program created by a graphics package. The display processing unit (DPU) executes each command during every refresh cycle and feeds the vector generator with digital x, y, Δx, Δy values.

The vector generator converts the digital signals into an equivalent analogue deflection voltage. This causes the electron beam to move to the start point or from the start point to the endpoint of a line or vector. Thus the beam sweep does not follow any fixed pattern. The display commands dictate the direction of arbitrary.
When the beam focus must be moved from the end of one stroke to the beginning of the other, the beam intensity is set to 0.

To maintain a stable image, the electron beam must sweep the entire surface of the screen and then return to redraw it several times per second. This process says Refreshing. Refresh Rate is the number of times per second that the screen refreshes. It measures in Hertz (Hz).