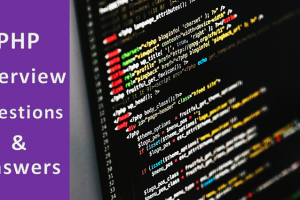 There is a list of the top frequently asked PHP Interview Questions and Answers given below.

1. What does PHP stand for?

2. Which programming language does PHP resemble?

3. How do you define a variable in PHP?

Ans – In PHP, a variable defines with the $ sign, It is followed by the name of the variable. It has the following syntax:

4. What is a NULL variable?

Ans – NULL variable: In PHP, It is a special data type that is used to denote the presence of only one value, NULL. You can’t assign any other value to it. It has the following syntax:

5. How do you define a constant in PHP?
Ans – Constant: It is an identifier for a simple value. Constant is just like variables except that once they are defined they cannot be changed or undefined. In PHP, there is no need to use the dollar sign($) before constants. It has the following syntax:

6. How many data types are in PHP?

Ans – There are mainly eight types of data types in PHP.

7. What are the different types of Array in PHP?

Ans – In PHP, there are three types of arrays:

8. Difference between “echo” and “print” in PHP?

3. echo is much faster than a print statement.
print is slower than the echo statement.

10. How can we create a database using PHP and MySQL?

Ans –
i. At first, establish a connection to the MySQL server from your PHP script.

ii. If the connection is successful, write a SQL query to create a database and store it in a string variable.

Ans –
1. In PHP, GET used for viewing something, without changing it.
In PHP, POST uses for changing something.

12. Mention some popular frameworks in PHP.

Ans – The for-each loop is used to loop through each key/value pair in an array. It has the following syntax:

15. Difference between require() and require_once() functions.

16. What is the use of the function imagetypes()?

Ans – This function provides the image format in PHP. It is supported by the current version of GD-PHP.

Ans – Comments are written within the block of PHP code to define the functionality of the code. In PHP, a single-line comment begins with //.
Example:

In PHP, multi-line line comment begins with /* and ends with */.

19. How to use the Ternary Operator in PHP?

Ans – Ternary Operator: It is a conditional operator that decreases the length of code while performing comparisons and conditionals. It has the following syntax:

20. What is a ‘Null Coalescing’ Operator in PHP?

Ans – The Null Coalescing operator is used to check whether the variable is null or not. It returns the non-null value from the pair of customized values. It has the following syntax: