One of the oldest and yet most commonly used Guided Transmission Media is Twisted Pair Cable. It consists of two insulated copper wires (1mm thick) twisted together in helical form. Twisting is done because two parallel wires constitute an antenna and it will catch or radiate signals and noise. If the wires are twisted then the waves at different twists are cancelled and the wire will radiate less effectively.

Twisted pair wire can transmit signals several Kilometers without amplification. It is capable of transmitting analogue as well as digital signals. The data rate may be from 1 Kbps to 100 Mbps. It can handle a signal of 100 MHz up to 600 MHz. Due to its low cost and ease of use, it is the most popular transmission media today for networking.

Another most popular Guided Transmission Media is Coaxial Cable. It consists of stiff copper wire at the core surrounded by insulating material. The insulator is covered by a net of conducting material which is again covered by a plastic sheath. This type of construction gives high bandwidth and better noise immunity. It can have a bandwidth of 1 GHz. So, It is mostly used for long-distance communications, cable television, etc. Light is entered into the fibre through the core. When this light touches the core clad boundary refraction is going to take place. Now, if the angle of incidence θi is greater than the critical angle θc for that pair of media then total internal reflection occurs there and the light reflects into the core again. In this way, light is propagated within the core from one end to the other. 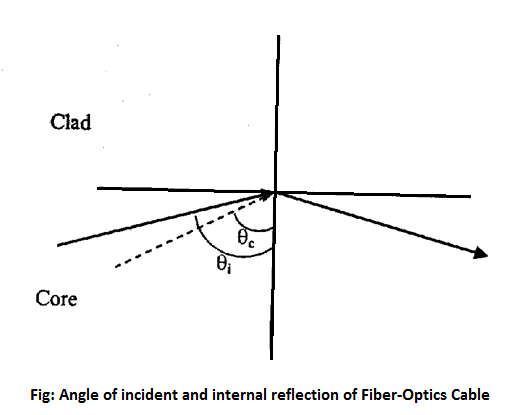