Process is a program at the time of execution. A process is more than a program code. It includes the program counter, the process stack, and the contents of the process register, etc. When a process executes, it changes the state. Generally, the state of the process determined by the current activity of the process. In Operating System, Each process may be in one of the following states: 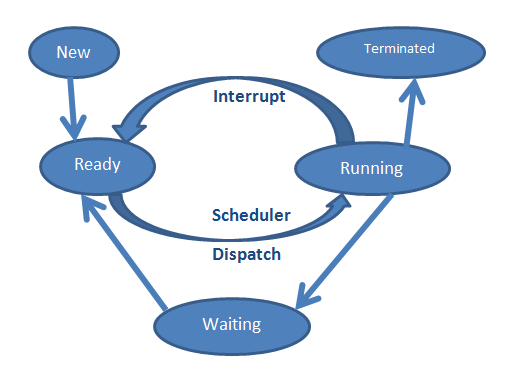 The important thing is that only one process can be running in any processor at any time. But many processes may be in ready and waiting states. The ready process loaded into a “Ready Queue“.

Ready -> Running: When it is time to select a process to run. The operating system selects one of the jobs from the ready queue and moves the process from the ready state to the running state.

Running -> Terminated: When the execution of a process has been completed, then the OS terminates that process from the running state.

Running -> Ready: When the time slot of the processor expired, then the operating system shifted the running process to the ready state.

Ready -> Running: When it is time to select a process to run. The OS selects one of the jobs from the ready queue and moves again the process from the ready state to the running state.

Waiting -> Ready: The process in the blocked state is moved to the ready state when the event for which it has been waiting occurs.