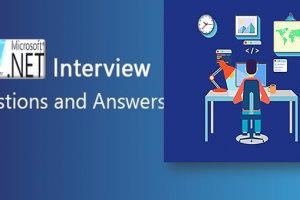 There is a list of the top frequently asked .NET Developer Interview Questions and Answers are given below.

1. What is Validation in ASP.NET?

2. Difference between ASP and ASP.NET.

3. What is the Application Life Cycle in ASP.NET?

Ans – In ASP.NET, a WEB page has execution Life-Cycle that includes 8 phases:
1. Page Request: When a page is requested by the user, ASP.NET parses and compiles that page.

2. Start: In this stage, page properties such as Request and Response are set. It also determines the Request type.

3. Initialization: During this stage, we can access the controls on the page but the control’s ViewState has not yet been initialized.

4. Load: In case of a postback, the control’s properties have been initialized from the ViewState.

5. Validation: Sometimes, there can be some validation set on the form.

6. Control Events: In the case of a postback, the control’s events are called.

7. Rendering: During the rendering stage, the page calls the Render method for each control and thus each control generates the HTML output that is merged with the resulting HTML of the page.

8. Unload: In this stage, the generated page output has already been sent to the client and the page can be discarded.

4. What is the ViewState in ASP.NET?

Ans – Viewstate is a built-in structure for automatically retaining values amongst the multiple requests for the same page. The ViewState is internally maintained as a hidden field on the page.

5. What is Postback in ASP.NET?

Ans – Postback is an event that is triggered when an action is performed by control on an asp.net page. when you click on a button the data on the page is posted back to the server for processing.

6. What are built-in objects in ASP.NET?

7. How many types of configuration files are in ASP.NET?

Ans – There are three types of configuration files in ASP.NET:
i. Machine
ii. Application
iii. Security

8. What is HTTP Handler in ASP.NET?

Ans – It is a type that runs in response to a request made to an ASP.NET application. A request can be for any type of ASP.NET resource but it is the HTTPHandler that generates the response. HTTP Handler is used to map incoming requests to the appropriate IHttpHandler or IhttpHandlerFactory class.

Ans – Caching is the most important aspect of a high-performance web application. It provides a way of storing frequently accessed data and reusing the data.

10. How many types of session state modes are in ASP.NET?

11. What is HttpModule in ASP.NET?

12. Difference between ADO.NET and ASP.NET.

13. Define DataSet and DataTable in .NET.

Ans – DataSet: Dataset provides a disconnected representation of result sets from the Data Source. It is completely independent of the Data Source. It provides much greater flexibility when dealing with related result sets.
DataTable: The DataTable class is located in the .NET Framework at System.Data.DataTable. It represents a table of in-memory data that is contained with a Dataset object. It can be created automatically by returning result sets from the DataAdapter to the Dataset object.

Ans – ASP.NET MVC is an open-source framework built on the top of Microsoft .NET Framework to develop the website and web application. ASP.NET MVC framework is the most customizable and extensible platform.

16. What is Razor View Engine in MVC?

17. How many types of HTML Helpers?

Ans – An HTML Helper is a method that returns an HTML string. The string can represent any type of content that you want.
There are three types of HTML helpers:
1. Inline HTML Helpers
2. Built-In HTML Helpers
3. Custom HTML Helpers

Ans – Actions methods are defined in the controller class and responsible to perform required operations on the user’s inputs like form values, query strings values etc.

19. What are Data Annotations in ASP.NET MVC?

Ans – Data Annotation: Data annotations are attributes, and attributes don’t typically contain code. They just represent meta-information for other modules to consume. By using data annotations, you decorate your model objects with metadata. This isn’t expected to produce any visible effect: It all depends on how other components consume metadata.

20. How to enable and disable client-side validation in ASP.NET MVC?

Ans – We can enable the client-side validation:

We can disable the client-side validation: