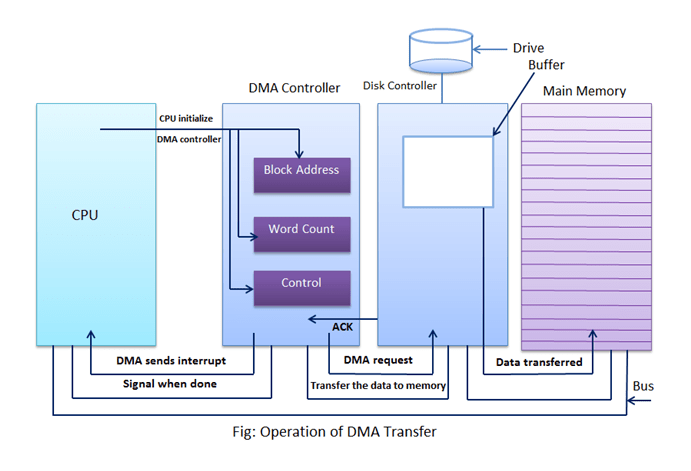 1. The starting address of the memory block where the data is available for reading or where the data stored (for writing).
2. The word count is the number of words in the block.
3. Specify the mode of transfer such as read or write.
4. A control to start the DMA transfer.

DMA Controller is a control unit. It’s a part of the I/O device’s interface circuit. It can transfer blocks of the data between I/O devices and the main memory. DMA controller acts as station master. It transfers the data with minimal intervention of the processor. When the DMA controller receives the above information, the DMA starts and continues to transfer data between memory and  I/O devices until an entire block transfer. When the assigned job of the DMA is done, it informs the CPU about the termination of the job.

DMA can use for “memory to memory” copying or moving of data within memory. DMA is also used in the network-on-chip and in-memory computing architectures. Many hardware systems are uses DMA. It including disk drive controllers, Graphics Cards, network cards, sound cards, etc.

Webeduclick is an online educational platform where provides tutorials of programming languages. It also provides the other important Computer Science Subjects which is very helpful to clearly understand the concept to every Technical Students. The purpose of this site is to help all students to take maximum advantage of their programming knowledge.