The memory unit is an essential component of any digital computer because it is needed for storing programs and data. the memory hierarchy system consists of all storage devices employed in a computer system from the slow but high capacity secondary memory to relatively faster main memory. 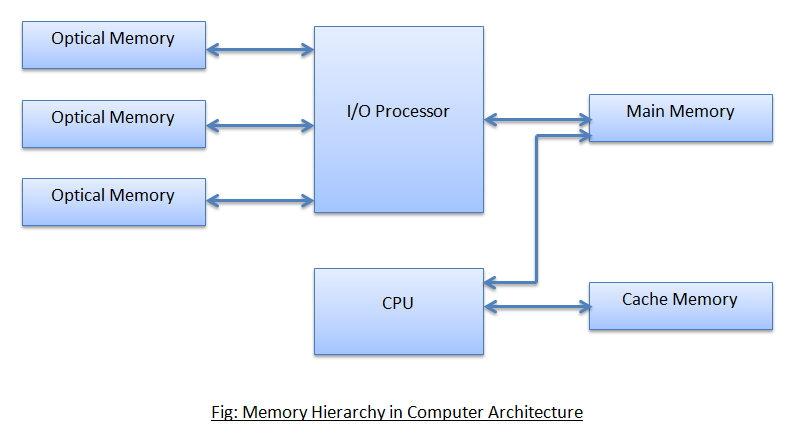 Registers are faster than all memories, a register is a group of flip-flops with each flip-flop capable of storing one bit of information. An n-bit register has a group of n flip flops and can store any binary information of n bits.

Cache is a special very high-speed memory. It is the intermediate Memory between the CPU and the main memory. The cache is used for storing segments of programs currently being executed by the CPU and is frequently needed in the present calculations.

The memory unit that communicates directly with the CPU is called Main Memory. The main memory is a relatively large and fast memory used to store programs and data during the processor execution. The principle technology used for the main memory is based on Semi-Conductor integrated circuits (RAM Chips). It is a volatile memory.

Devices that provide backup store are called “Auxiliary Memory” or “Secondary Memory“. The most common Auxiliary Memory used in the computer system is magnetic disks. They are used for storing system programs, large data files and other backup information.

In recent years, optical disks (CD-ROMs) are become available. They have a much higher recording density than magnetic disks. A CD is prepared using a high power infrared laser to burn 0.8-micron diameter holes in a coated glass master disk. The burned area is called pits and the unburned area between the ‘pits’ are called ‘lands‘.