Halftoning and Dithering in Computer Graphics

Halftoning is the process of printing continuous tone images in newspapers, magazines and books using a bi-level printer. In the case of black & white printing, one can’t directly print lots of shades of grey using only pure black ink on a printing press. What it does is, create a dot pattern by exposing a negative through a fine screen onto a photosensitive printing plate. The size of the dots varies depending on the fineness of the screen and the length of exposure.

In areas where the images were dark, the plate would print large dots of ink, so large and dense that the dots may even overlap. In areas where the image was light, only the smallest dispersed dots of ink are printed. The dots fuse, both on the paper and in our eyes, to give a convincing illusion of continuous tones. Such printed images made up of a series of varying sizes & varying density dots in a specific pattern to simulate the look of continuous tones are commonly known as Halftones. The colour halftones are made up of a series of dots in cyan, magenta, yellow and black (CMYK) that fool the eye into seeing the millions of colours that make up the original Image.

It is an effect that is used in many different places, including regular 2D graphics and also in printing. In 3D, It is used largely to show more realistic colours without needing to increase the colour depth of the image. 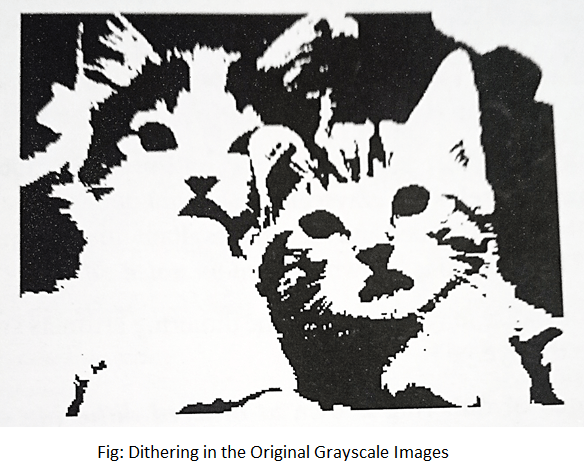 Let us now explain the basic concept and techniques of dithering. We know that to represent real-world objects on a computer screen, we need to have a “True Color” graphics system capable of displaying 16777216 (16 million) different colours. But when not so many different colours are available in the system. This technique may be adopted to render images with colours that are apparent, non-existing actually. These techniques are known as Dithering. It is used in computer graphics to create the illusion of additional colours on a colour display or printer.