3D images are much more complex than 2D images because a greater amount of information is needed to create a realistic 3D world. In addition, several mathematical operations must be used to project this 3D world on a computer screen.

3D images are handled inside the computer using abstract models. Usually, each 3D object is composed of hundreds or even thousands of small triangles that describe its structure. When the program wants to move an object, it manipulates the corners of the triangles to create movement. Of course, real objects aren’t made up of thousands of triangles but doing it this way is necessary to do the 3D effect.

It is an algorithm that is used to give 3D surfaces realistic shading. The effect helps the object appear to have depth and helps to define the shape better. It is a popular computation that is used in many 3D games and Engineering design software.

This operation determines what part of an object is visible on the screen and “clips out”any part that the user can’t see. This saves rendering time since the part of off-screen objects is ignored.

Objects in the real world have their appearances shaped by the light sources in the scene. Lighting effects cause colour shading, light reflection, shadows and other effects to add to objects based on their position and the position of light sources in the room. It can be anything from an overhead light in an internal room in an office to the sun, moon or even an explosion!

For realistic objects, it is necessary to overlay pictures on them to give them texture. For example, most of the walls aren’t made of a solid, flat substance. They are made of a material such as brick, wood or plaster and they may have pictures, tapestry or signs on them. Texture mapping allows objects to be made so that they appear to have substance instead of being “flat”. 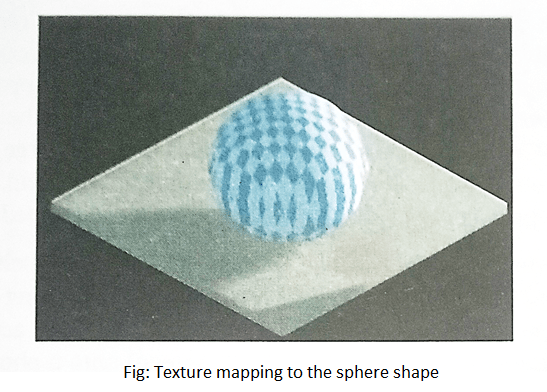