TMS is a “Truth Maintenance System” which implements to permit a form of non-monotonic reasoning by permitting the addition of changing statements to a knowledge base. It also say as “Belief-Revision” or “Revision Management Systems“. 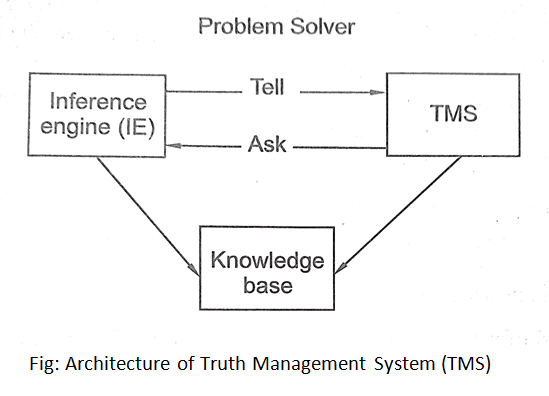 1. The main job is TMS is to maintain “consistency of knowledge” being used by the problem solver and not to perform any inference functions.

3. When discoveries made, this more recent information can displace previous conclusions that are no longer valid.

4. Actually, the TMS doesn’t discard conclusions like Q as suggested. That could be wasteful, since P may again become valid, which would require that Q and facts justified by Q be received. Instead, the TMS maintains dependency records for all such conclusion. These records determine which set of beliefs are current. Thus, Q removed from the current belief set by making appropriate updates to the records and not by erasing Q. Since Q would not be lost, its rederivation would not be necessary if P become valid once again.

5. TMS maintains complete records of reasons of justification for beliefs. Each proposition or statement having at least one valid justification make a part of the current belief set. The Statements are lacking acceptable justifications exclude from this set. When a contradiction discovers, the statements responsible for the contradiction identifies and an appropriate one retracts. This in turn may result in other retractions and additions. The procedure uses to perform this process that says “Dependency-Directed Back-tracking“.

6. TMS maintains records to reflect retractions and additions so that the IE will always know its current belief set. The records maintain in the form of a “Dependency-Network“.
i. The nodes in the network represent KB entries such as premises, conclusions, inference rules and the like.
ii. Attached to the nodes are justifications that represent the inference steps from which the node derived.

The Inference Engine (IE) solves domain problems based on its current belief set, while the TMS maintains the currently active belief set. The updating process is incremental. After each inference, information exchange between the two components. The IE tells the TMS what deductions it has made. The TMS, in turn, asks a question about current beliefs and reasons for failure. If maintains a consistent set of beliefs for the IE to work with even if now knowledge is added or removed.

Step2: From this, the IE would rightfully conclude Q and add this conclusion to the KB.

Step3: Later, if it was learned that P was appropriate, it would be added to the KB resulting in a contradiction.

Step4: Consequently, it would be necessary to remove P to eliminate the inconsistency.