Computer Keyboard Keys and Their Functions

The most common input device is the keyboard. The keyboard allows a user to communicate with the PC through keystrokes that represent character data and commands. The computer keyboard has a variety of keys that are dedicated to specific functions. Generally, computer keyboard keys are classified into 8 types:

Keyboard keys and their functions:

All Computer Keyboard Keys and Their Functions described below: 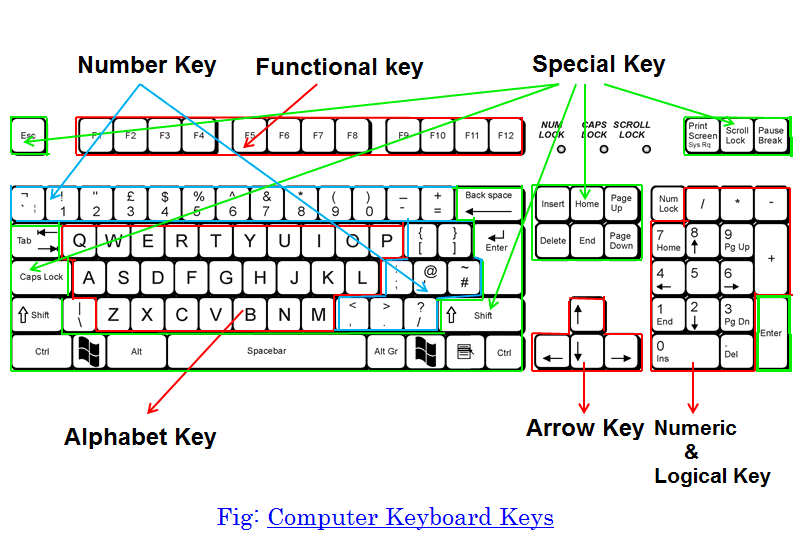 The alphabetic keys along with the row numbers and special characters. These keys match those on a typewriter. The alphabet Keys include All English Alphabet letters (A – Z).

These keys are located to the right of the alphabetic keys. This group of keys has four smaller groups of keys, such as Left Arrow, Right Arrow, Top Arrow & Down Arrow Key.

The Numeric keypad which is located on the extreme right side of nearly all modern keyboards. It contains keys for ten numbers (0 – 9), as well as the four arithmetic functions that says Logical Key. The Numeric keypad can also be used as a cursor control pad by toggling the NUM LOCK key.

The Functional Key is typically located across the top of a keyboard today. Current keyboards have 12 functional keys (F1 – F12).

Special keys on keyboard and Their Functions:

In the past, this Scroll Lock has existed on the keyboard. When Scroll Lock selected, pressing the arrow keys resulted in scrolling through a page of text rather than moving the cursor line by line.

The SHIFT key is used to toggle a key between its lowercase and uppercase characters. It also used on international keyboards to access special characters on keys where there are more than two characters on the key. Press it down at the same time as the letter/character key to produce the special character shown on the bottom right side of the key.

This Enter key is the most used key on the keyboard. The ENTER key performs a variety of functions from ending the line or entry in application software to serving as a weapon trigger in a shooting game. In word processors, the ENTER key simulates the action of the carriage return button on an electric typewriter.

The BACKSPACE key erases a character by replacing it with the character or white space that follows it.

The Ctrl key is mainly used in many keyboard shortcuts.

The Alt key is also used in many keyboard shortcuts.

Tab key used to move between items or move forward 5 characters. The TAB key produces defaults to half an inch of white space.

In its default mode (PAUSE), this key will if enabled by software, pause the display or the action of an application program. If used in combination with the CTRL key, the alternate mode of this key interrupts or halts some software programs, primarily MS-DOS commands and applications. Using the CTRL and BREAK keys together is the same as using the CTRL and C keys to break an action.

The Escape key is typically enabled as an exit key by most software applications. It also used in combination with other keys to create special key values and to indicate other actions. For example, in Windows, the ESC key used to close a context menu.

This key is used to delete any content, file, media, etc.

If you are currently being worked has more than one page in a document, then this Page Up key is used to move or scroll up one page.

If you are currently being worked has more than one page in a document, then this Page Down key is used to scroll down one page.

The End key uses for moving the cursor to the end of the line.

Most newer keyboards have added three Windows-specific keys on either side of the SPACEBAR that serve as shortcuts to the Windows menus.

Multimedia key is a special type of key that performs some entertainment function. But those keys are not included with many traditional 104-key keyboards. Such as Play/Pause, Music Media Player, Volume+/Volume-, Mute.

Internet key is a special type of key that is used to access Internet Explorer easily. Otherwise, we can work on the Internet by using those keys.