Parts of Mouse and its function

The mouse was introduced with the Apple Macintosh and was an immediate success. The mouse was the natural, intuitive, inexpensive pointing device users wanted. But, it wasn’t until the early 1980s, when Windows and its graphical user interface (GUI) was released, that the PC had an operating system that could work with the mouse. Since that time, the mouse has become a piece of standard equipment on virtually all PCs. A mouse translates the motion of the user’s hand into electrical signals. So that the PC uses to track a pointer across the monitor’s display. To capture the motion of the user’s hand, there are mainly 7 parts of an optomechanical mouse.

Ball: The ball is the largest and central part of the mouse. When the user grasps the mouse and moves it over a mousepad or the desktop, the ball rolls inside the mouse.

Rollers: As the ball rolls inside the mouse, two rollers that touch the ball track its rotation side to side and up and back.

Roller shafts: The rollers are each connected to a shaft; as the rollers turn in conjunction with the ball, each shaft turns an optical encoding disk that is attached to it. 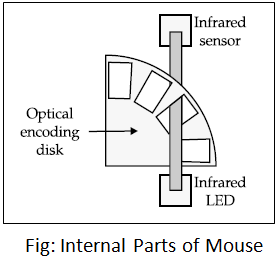 Infrared LED and sensor: On one side of each optical encoding disk is a light-emitting diode (LED) that shines an infrared light beam on the disk. On the other side of the disk is a light-sensitive transistor that serves as an infrared sensor. As the disk turns, the solid areas between the holes on the disk break the LED’s infrared beam and the infrared sensor sees pulses of light. The rate and duration of the light pulses indicate the speed and distance of the mouse’s travel.

Processor: The mouse has a processor that reads the pulses sent from the infrared sensors and converts them into binary data, which is sent to the PC’s interface over the mouse’s connecting cord.

Buttons: The mouse also has one, two, three, or more buttons that are connected to small switches that also connect to the mouse’s processor. As the user clicks the buttons to select an object on the screen or start a program or applet, the processor converts the clicks into binary data that is sent to the PC.