Hard Disk is a black box of sorts that is thought of as just a small device that “somehow” stores data. There is nothing wrong with this approach of course, as long as all you care about is that it stores the data. It is hard to understand the factors that affect performance, reliability and interlacing. Fortunately, most hard disks are the same on the inside. While technology evolves, many of the basics are unchanged from the first PC hard disks in the early 1980s.

Hard disks are rigid platters composed of a substrate and a magnetic medium. The substrate – the platters base material must be non-magnetic and capable of being machined to a smooth finish. It is made either of aluminium alloy or a mixture of glass and ceramic. To allow data storage, both sides of each platter are coated with a magnetic medium. It is formerly magnetic oxide but is now almost exclusively a layer of metal called a thin-film medium. It stores the data in magnetic patterns with each platter. It is capable of storing a billion or so bits per square inch (basis) of platter surface. 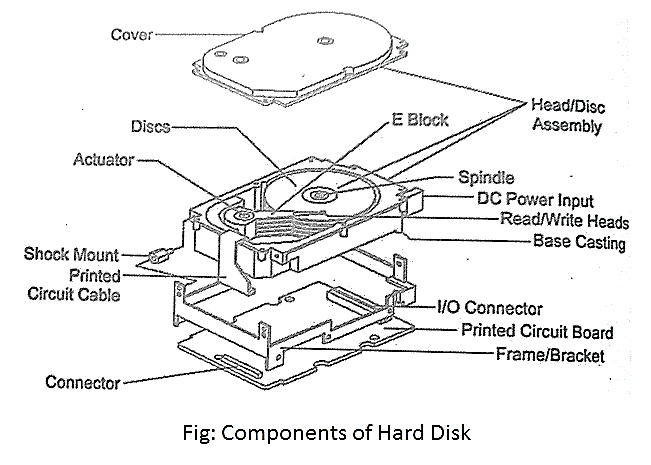 The various Components of a Hard Disk interoperate when it receives a request for data. A hard disk uses round flat disks called platters. It is coated on both sides with a special media material designed to store information in the form of magnetic patterns. The patterns are mounted by cutting a hole in the centre and stacking them onto a spindle. The platters rotate at high speed, driven by a special spindle motor connected to the spindle. Special electromagnetic read/write devices called Heads. It is mounted onto sliders and used to either record information onto the disk or read information from it. The sliders are mounted onto arms, all of which are mechanically connected into a single assembly and positioned over the surface of the disk by a device called an Actuator. A logic board controls the activity of the other components and communicates with the rest of the PC.

Each surface of each platter on the disk can hold tens of billions of individual bits of data. These are organized into larger “chunks” for convenience. It allows access to information easier and faster. Each Platter has two heads, one on the top of the platter and one on the bottom, so a hard disk with three platters has six surfaces and six total heads. Each platter has its information recorded in concentric circles called Tracks. Each track is further broken down into smaller pieces called Sectors. Each of these holds 512 bytes of information.