How does a Floppy Disk Drive work?

The invention of hard disks relegated floppy disks to the secondary roles of data transfer and software installation. The invention of the CD-ROM and the Internet combined with the increasingly large size of software files. The floppy disk persists unchanged for over a decade in large part. A floppy disk size is 3.5 inch and the memory capacity is 1.44 MB. 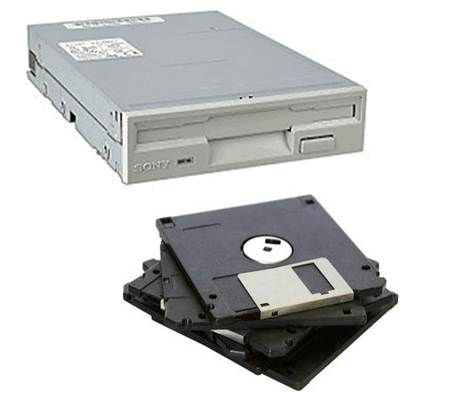 The floppy disk drive (FDD) was invented by Alan Shugart at IBM in 1967. The first drives used an 8-inch disk is also called a “diskette“. It evolved into the 5.25-inch disk that was used on the first IBM Personal Computer in August 1981. The 5.25-inch disk held 360 kilobytes compared to the 1.44 MB capacity of today’s 3.5-inch diskette.

1. Data Transfer: The floppy disk is still the most universal means of transferring files from one PC to another. With the use of compression utilities, even moderate-size files can be shoehorned onto a floppy disk. Anyone can send data to anyone by this disk and feel quite confident that the PC at the other end will be able to read it. The PC 3.5-inch floppy is such a standard that many Apple and even UNIX machines can read them. Makes these disks very useful for cross-platform transfer.

2. Small File Storage and Backup: The floppy disk Makes used for store and backing up small amounts of data, probably more than you realize.

3. Software Installation and Driver Updates: Many new pieces of Hardware still use floppies for distributing driver software and some software still uses floppies.

If you have spent any time at all working computer, then chances are good that you have used a floppy disk at some point. The floppy disk drive (FDD) was the primary means of adding the data to a computer until the CD-ROM drive became popular. FDDs have been a key component of most personal computers for more than years. A floppy disk drive reads and writes the data to a small circular piece of metal-coated plastic similar to an audio cassette tape.