X.25 is a family of protocols that was popular during the 1980s with Telecommunication Companies and financial transaction systems such as Automated Teller Machine (ATM). 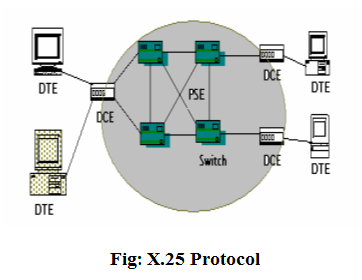 There are mainly three types of components of X.25 Network, those are:
1. DTE: It stands for Data Terminal Equipment. DTE is mainly a dumb terminal or the serial port used on a computer/workstation.

2. DCE: It stands for Data Communications Equipment. DCE is typically a modem, DCE is used to establish, maintain, and terminate communication network sessions between one data source and the receiving device.

3. PSE: It stands for Power Sourcing Equipment. It is a source of power, such as a PoE Ethernet switch. It contrasts with the powered device (PD), which uses power, such as a network camera or IP phone.

i. X.25 Protocol is optimized for low-speed lines (100kbps and below).

ii. X.25 has been the basis of the development of other packet-switched protocols like TCP/IP and ATM.

iv. These protocols have also the ability to match DTE’s having different line speeds.