In UNIX Process Scheduling, the kernel allocates the CPU based on the priorities of the process for a time quantum. Preempts the process, when the time quantum expires and adds it back into one of several priority queues. So, UNIX follows a specially designed CPU scheduling algorithm which is called ‘Round Robin with Multi-level feedback priority queues’. Here the priority is based on process type and execution history. The priority of each process is recomputed once per second with the following formula: 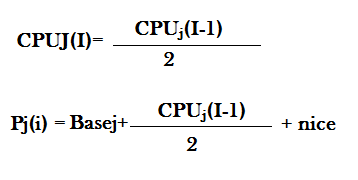