Types of Dependency in DBMS

Functional Dependency is the consequence of the inter-relationships among attributes of an entity represents by relation, it may be due to the relationship between entities.

In the Supplier and Product databases attributes Name, Status, and City of relation S are each functionally dependent on attribute SNo, because given a particular value for SNo, there exists precisely one corresponding value for each of Name, Status and City. Symbolically We can write:
S.SNo->S.Name
S.SNo->S.Status
S.SNo->S.City 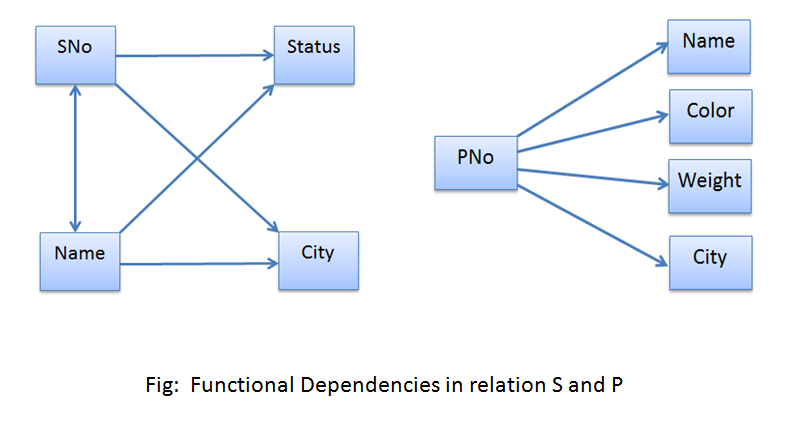 All non-key attributes depend on the key attribute, it says Full Functional Dependency.
X->Y is a full-functional dependency because of removal of any attribute a form X would result in the cancellation of dependency. 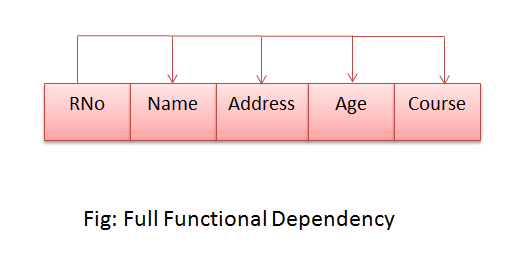 There are four types of Functional Dependency in DBMS:

A functional dependency X->Y is a Partial Dependency if some attributes AєX can removes from X and the dependency still holds.

A functional dependency X->Y about scheme R is a Transitive Dependency if there is a set of attributes Z that is neither a candidate key nor a subset key of R and both X->Z and Z->Y hold.

This is the case that exists in a table, We can remove this dependency by splitting each relation into two separate tables, which are to be linked using a foreign key. When one non-key attribute depends on other non-key attributes, it says Transitive Dependency. 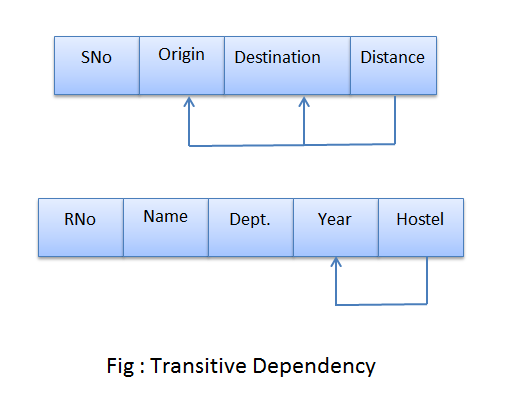 Multivalued Dependencies are a consequence of the first normal form. The first normal form doesn’t allow an attribute in the tuple to have more than one value. If we have two or more multivalued independent attributes in the same relation schema. We would get into the problem of repeating every value of one of the attributes with every value of the other attribute to keep the relation instances consistent. This constraint is specified by a multivalued dependency.

Consider the Course database (Course, Teacher, Student, Time, Room) relation as given below:

Join Dependency is a constraint, it is just like a functional dependency or multivalued dependency. It is satisfied if and only if the relation concerned is the joining of a certain number of projections. This type of constraint is called a join dependency.

We now consider a special class join dependencies which help to capture data dependencies present in a Hierarchical Data Structure. 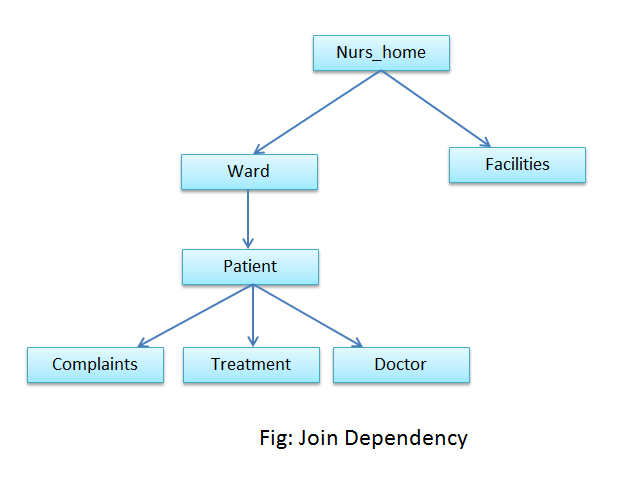 In the figure, a Nurs_home database shown, it has an inherent hierarchical organization. It implies that information regarding wards and patients currently admitted to a ward depends only on the Nurs_home. But the facilities are present in that hospital (Vice-Versa).