Motherboard Components and Their Functions

The motherboard is the main circuit board in a PC. It contains all the circuits and components that run the PC. The Motherboard Components given below:

Main components of the motherboard are CPU, BIOS, RTC, Chipset, etc.
CPU: It stands for Central Processing Unit. It is the heart of a computer. All scheduling, computation and control occur here. CPU is often an INTEL or Celeron Processor.

BIOS: It stands for Basic Input Output System. It is a non-volatile memory that contains configuration information about the computer. It contains all the code required for the CPU to communicate with the keyboard, mouse, video display, disk drives and communication devices. When a PC powered on it uses the BIOS ‘boot code’ to set up many required functions that bring the PC to a point where it is ready to work.

RTC: It stands for Real-Time Clock chip keeps date, day and time in a 24-hour format. The PC uses this clock to ‘timestamp’ files as they created and modified. When you print a file it time-stamps the pages as they are printed.

Chip Set: These are large chipsets often broken into two devices with one providing an interface from the CPU to the memory and the other providing controllers for IDE, ISA, PCI and USB devices. 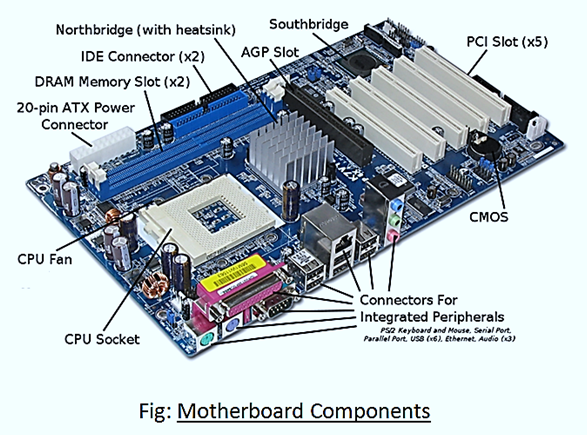 Primary Connectors on the Motherboard:

Power: A 20-pin connector accepts a plug from the power supply. This plug carries DC power to all the circuits on the motherboard.

Keyboard: A mini din 6 pins (round) connector found at the back of the motherboard is where the keyboard plugs in.

Mouse: A mini din 6-pin connector found next to the keyboard connector is where the mouse plugs in.

Display: This connector isn’t integrated into the motherboard but it is included in this list since its function is necessary. It is a 15-pin, D-shell type connector found on a video card that plugs into the AGP connector of the motherboard.

IDE: It stands for Integrated Drive Electronics. These are 40-pin connectors that provide a place to connect the ribbon cables from the drives (HDD, CD/DVD). All data between the motherboard and the drives carried in these cables.

FDD Connector: It is similar in function to the IDE connector. It is a 34-pin ribbon connector that carries data between the motherboard and any floppy drive installed in the PC.

DRAM: It stands for Dynamic Random Access Memory. These connectors are for SIMM and DIMM-type memory modules.

Serial Connectors on the Motherboard:

Standard Serial Connector: This connector has been around in PCs since it first appeared. It was originally located on ISA expansion-type cards. Today it is an integral part of newer motherboards. It is a 9 pin, D-shell connector that allows you to connect external devices with serial ports to your PC. The maximum data rate is 115 KB/s.

USB: It stands for Universal Serial Bus. It is a relatively new serial bus. Originally specified as low speed (1.2 MB/s), it enhanced to a full speed of 12 MB/s. The latest version 3.0 is specified as high speed (400 MB/s). USB is now a standard connector on all new motherboards. Unlike serial and parallel ports, the USB port designed to power devices connected to it.

Parallel Connectors on the Motherboard:

Standard Parallel: It has 37 pins and it is now integrated into a new motherboard. It used to connect your printer to the PC and moves data at about 1 MB/s.

SCSI: It stands for Small Computer System Interface. It moves data at a maximum of up to 80 MB/s. It is not integrated into most PC motherboards.

The CPU connects to expansion card connectors through one of the chipset ICs. They are located on the motherboard near the rear of the PC. These connectors allow special function cards to plug into and work with the PC.

ISA: It stands for Industry Standard Architecture connectors have been around since 1980 and it first appeared in the IBM XT PC. This type of slot still appears on some newer motherboards so older expansion boards can still be used.

PCI: It stands for Peripheral Component Interconnect is a newer and faster interface that accepts all expansion cards that have a PCI interface.

AGP: It stands for Accelerated Graphics Port. It is a connector that is designed to work with video cards. Your video display plugs into and These video cards control this AGP.