How does Electricity Work in Computers

How does electricity work in a PC? 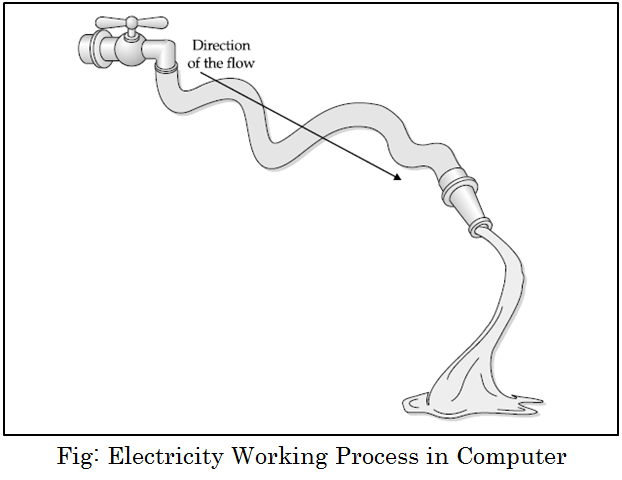 When water is flowing through a pipe, it is pushed along by a measurable rate of pressure. A good experiment is to go out into your yard and water your garden with a hose. With the water turned on about half the flowers bend a bit as the water hits them, but it does not push them over. If you then turn the water up to full blast, it not only pushes the flowers over but the water pressure—the force of the flow—may even damage them. Electricity also flows through a circuit with measurable pressure. This pressure is measured in units called volts.

While the water is flowing through a pipe or hose, it experiences some loss of pressure through friction. The same thing happens to electricity as it flows through a circuit: there is friction that causes a loss in pressure. This friction is called resistance and is measured in units called ohms. The amount of water that flows through a pipe for a specified length of time, such as gallons per minute, is called the volume of the water flow. For an electrical current, volume, or the rate of flow, is measured in amps. Another electrical term you should know is the watt. The amps (rate of electrical flow) in combination with the volts (pressure in a circuit) form the watts or the electrical power in a circuit.

The electrical flow in a direct current (DC) keeps a constant pace and flows in the same direction all the time. Direct current flows from a negative charge to a positive charge and does not fluctuate.

Let me repeat this: the computer needs DC power, but your wall outlet provides AC power. Inside your PC is a module called the power supply, which converts the electricity in your household circuit (HC) from AC power into the DC power that the computer needs. Yes, it means that the HC provides AC, but the PC needs DC. All of the circuitry, the electronics on the motherboard, including the microprocessor, the disk drive motors, and all other electrical parts, require DC power to operate. It is the function of the power supply to convert the AC power to DC power.

The PC’s power supply solves the internal power issues for the computer, but many of the PC’s power problems are caused by the original power source. Although we tend to take electrical power for granted most of the time, that is, until it is not there, electrical power can be a very unstable, damaging force that the PC needs to be protected against. Electrical power tends to fluctuate in its voltage. While its normal operating range can vary, it is usually between 95 and 125 volts. On occasion though, the current spikes above or drops below its normal range and causes damage to a PC that is unprotected from sudden changes in the current. The best way to protect your PC is with a surge suppressor or an uninterruptible power supply (UPS).