Explain the Booting Process of an Operating System

Booting Process of an Operating System:

The process used to start up a PC each time it is powered on is called the boot process. While it sounds like it could refer to kick-starting, this term derived from the saying, “Pulling one’s self up by one’s bootstraps,” which is a long-winded way of saying you are a self-starter. PCs are self-starters in the respect that when you flick on the power switch, the PC verifies its hardware configuration, runs a few function tests, and then get its operating system loaded into memory and running on the CPU.

The boot process performed under the guidance of the BIOS. The BIOS contains the instructions needed to verify, test, start the PC and boot the computer. When the computer boots up, the BIOS is behind the scenes causing and managing the actions that are taking place. The PC’s hardware cannot perform independent actions. It must have instructions to do anything at all. These instructions are in the form of the PC’s software, which are blocks of instructions that guide the hardware to perform specific activities. 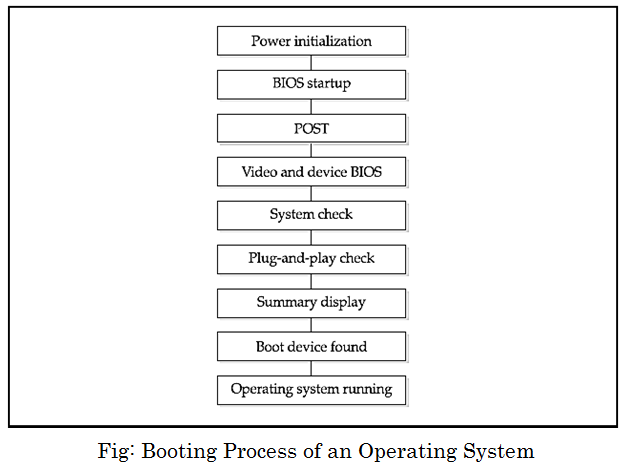 2. The system reset command sent by the motherboard’s chipset causes the CPU to read its first instruction from what called the jump address. This address always located in a fixed preset location, typically addressing FFFF0h in system memory. It contains the physical address of the BIOS boot program on the ROM BIOS chip.

3. The CPU executes the first instruction, which copies the BIOS programs into system memory and starts the BIOS running.

4. The BIOS next performs the POST (Power-On Self-Test) process. The POST verifies and tests the hardware configuration stored in the BIOS configuration information. Should the POST detect any problems, it sounds beep codes, one or more beeps through the system speaker to indicate the nature of the problem, or displays an error message, and the boot process stops.

5. If the POST finds no problems, the boot process continues. At this point, the system BIOS looks for the video adapter’s BIOS and starts it. Virtually all peripheral devices on the PC have their own BIOS. This is the first time, aside from the noises of the disk drives and a single beep indicating all is well, that you will know the PC is booting. Information about the video card is displayed on the monitor’s screen.

6. The display of the video adapter’s information followed by information about the system BIOS itself. This usually includes information on the manufacturer and version of the BIOS program.

7. Any device BIOS routines started. The video card’s BIOS starts first to turn on the display, then information about the system BIOS and the other BIOSs displayed as they started.

8. Next, the BIOS begins a series of tests on the system, including the amount of memory detected on the system. This test usually displayed on the screen as a run-up counter showing the amount of memory detected and tested. Because the BIOS now has use of the monitor, it displays error messages for any problems detected instead of the beep codes that it had to use before the display available.

9. With the device BIOSs loaded, the system BIOS checks if the devices listed in the CMOS configuration data are present and functioning, including their speeds, access modes, and other parameters. In this sequence, the serial and parallel ports assigned their identities (COM1, COM2, LPT1, etc.). As each device passed, a message displayed.

10. If the BIOS supports Plug and Play (PnP) technology, any PnP devices detected are configured. Information on each PnP device displayed on the screen, although it typically goes by much too fast to read.

11. At the end of the test and configuration sequence, the BIOS should display a summary data screen. It shows details of the PC as the BIOS sees it and indicates that the system is verified and ready for use.

In most cases, the boot sequence parameters will be set to look for the operating system on first the floppy disk drive, then the hard disk drive, and perhaps, if all else fails, the CD-ROM drive. This sequence can be changed to reflect the sequence desired. If the first boot device is the hard disk, the BIOS looks for the master boot record (MBR) to use to start the operating system.