The chipset is technically a group of chips that helps the processor and other components on the PC communicate with and control all of the devices plugged into the motherboard. The chipset only contains enough instructions to perform its functions at the very most rudimentary level. Most of the function that occurs between the chipset and a device is provided by the device’s device driver reacting to the basic commands communicated to it from the chipset. 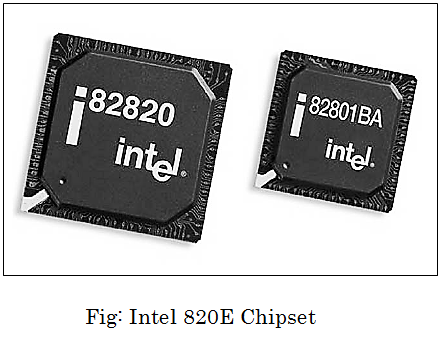 A chipset integrates several VLSI (Very large scale integration) chips that provide much of the PC’s functionality. Each of the chips integrated into the chipset at one time could have easily been a stand-alone chip. but by combining them into a single chip, the controllers and devices combined into the chipset can share common actions. It reduces the physical space required on the motherboard.

Memory: This category defines the characteristics of the DRAM support included in the chipset, including the DRAM refresh technique supported, the amount of memory support (in megabits usually), the type of memory supported, and whether memory interleave, ECC (error-correcting code),
or parity is supported.

Interfaces: This category defines the type of PCI interface implemented and whether the chipset is AGP-compliant, and supports integrated graphics, PIPE (pipelining), or SBA (sideband addressing).

Arbitration: This category defines the method used by the chipset to arbitrate between different bus speeds and interfaces. The two most common arbitration methods are MTT (Multi-Transaction Timer) and DIA (Dynamic Intelligent Arbiter).

South bridge support: All Intel chipsets and most of the chipsets for all other manufacturers are two processor sets. In these sets, the northbridge is the main chip and handles CPU and memory interfaces among other tasks, while the southbridge (or the second chip) handles such things as the USB and IDE interfaces, the RTC (real-time clock), and support for serial and parallel ports.