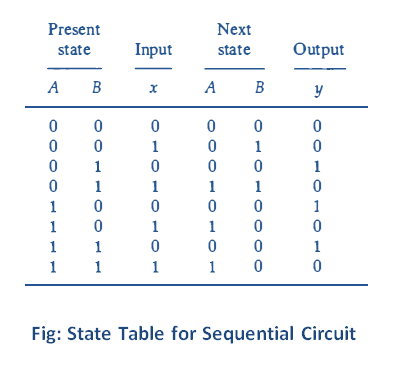 The information in a state table can be graphically represented in a state diagram. In this type of diagram, a state represented by a circle, and the transition between states indicated by directed lines connecting the circles. The state diagram of the sequential circuit given below. For example, the directed line from state 00 to 01 labelled 1/0. It means that when the sequential circuit is in the present state 00 and the input is 1, the output is 0. After a clock transition, the circuit goes to the next state 01. The same clock transition may change the input value. If the input changes to 0, the output becomes 1. But if the input remains at 1, the output stays at 0. This information obtained from the state diagram along the two directed lines from the circle representing state 01. A directed line connecting a circle with itself indicates that no change of state occurs.