Pipelining is the process of accumulating instruction from the processor through a pipeline. It allows for storing and executing instructions in an orderly process. It also known as pipeline processing. Pipelining is a technique where multiple instructions overlapped during execution. It divided into stages and these stages connected to form a pipe-like structure. Instructions enter from one end and exit from another end. 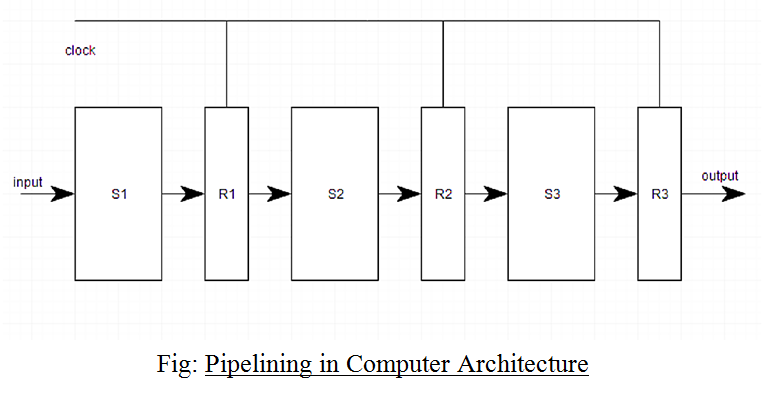 Example: In a car manufacturing industry, huge assembly lines are set up and at each point, there are robotic arms to perform a certain task, and then the car moves on ahead to the next arm.

The pipeline is mainly divided into 2 categories:

Arithmetic pipelines usually found in most computers. These pipelines are used to divide an arithmetic task into subtasks to be executed in different pipeline segments. They are used for floating point operations, multiplication of fixed point numbers etc.

It is similar to the use of an assembly line in a manufacturing plant. In an assembly line, the product goes through various stages of production. The advantage of such a system is that products at various stages can be worked on simultaneously. This process is known as pipelining since just like a pipeline, new inputs are accepted at one end before previously accepted inputs appear as outputs at the other end.

In general, pipelining requires more registers to store data between the stages. The above figure shows an expanded view of this concept. To speed up the instruction cycle processing, the pipeline should have more stages.

In a pipelined design, few instructions are in some stage of execution. There are possibilities for some dependency amongst these sets of instructions and thereby limiting the speed of the Pipeline. The dependencies occur for a few reasons. Those dependencies in this pipeline called Hazards. There are mainly three different types of hazards in computer architecture are:

2. Data Hazards: When several instructions are in partial execution, and if they reference the same data then the problem arises. We must ensure that the next instruction does not attempt to access data before the current instruction because this will lead to incorrect results.