Life Cycle of Thread in Java with Diagram

A thread life cycle is always in one of these five states. It can move from one state to another state. In Java, the life cycle of a thread has five states. 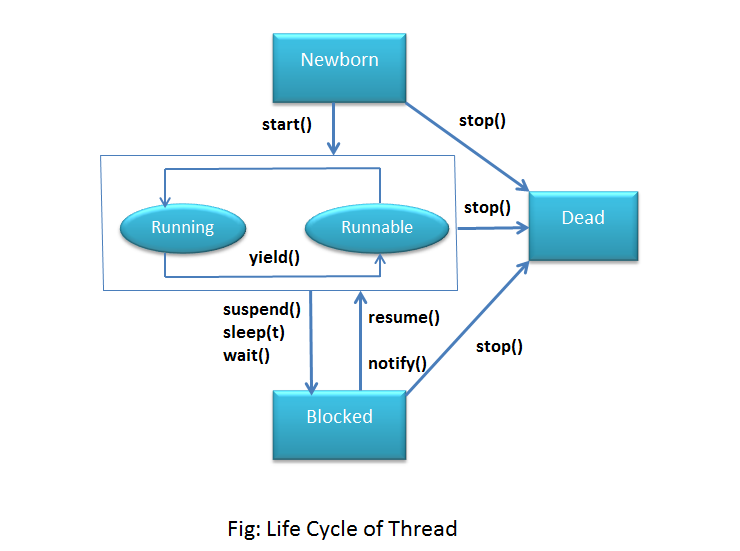 Life Cycle of Thread in Java:

When we want to create a thread object, the thread is born then it is said to be Newborn State. At this State, we can do by using start() method.

It means that the thread is ready for execution and it is waiting for the availability of the processor. If all threads have equal priority, then they are given time slots for execution FCFS manner (First Come First Serve).

Then the thread that relinquishes control joins the queue at the end and again waits for its turn. This process of assigning time to threads that are known as Time-Slicing. At this State, we can do by using yield() method.

It means that the processor has given its time to the thread for its execution. The thread runs until it relinquishes control on its own. When a running thread may relinquish its control, then the following situations occur:

A thread is said to be blocked when it is prevented from entering into the runnable state and subsequently the running state. This happens when the thread is suspending, sleeping or waiting to satisfy certain requirements. A blocked thread is “not runnable” but not dead.

A running thread ends its life when it has completed executing its run() method. It is a natural death. We can kill the thread by using stop() method.

When one thread may try to read a record from a file while another is still writing to the same file. Depending on the situation, we may get strange results. Java enables us to overcome this problem using a technique known as Synchronization. It has the following syntax: