Isometric Projection is a special case of Axonometric projection when the parallel projectors make equal angles with all three principal axes. Isometric Projection of an object is obtained by first manipulating (rotating) the object about two axes (X and Y) by a fixed amount followed by Orthographic Projection onto the projection plane (Z=0). Now, we have to derive mathematically the degree of rotation needed for the two axes. 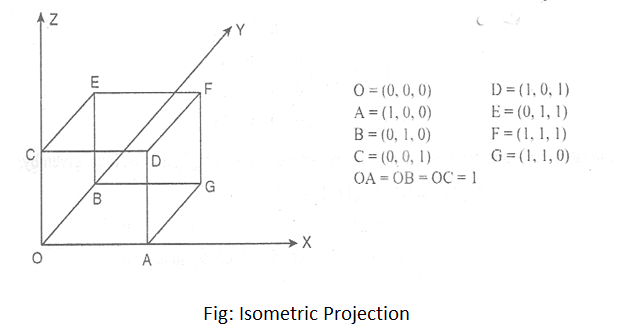 Let us consider a unit cube OADCEFGB such that three of its edges OA, OB and OC are along three principal axes X, Y, Z respectively. Now to obtain Isometric Projection. The objects are to be manipulated such that after orthographic projection these three edges are equally foreshortened.

Let us also assume that after the resultant transformation matrix for isometric projection is applied on the unit cube the points A(1, 0, 0), B(0, 1, 0) and C(0, 0, 1) transform respectively to A'(Xx, yx, 0), B'(Xy, yy, 0) and C'(Xz, yz, 0). This happens because the X, Y and Z axis on which the points lie transforms respectively to X’, Y’ and Z’ axis. The z coordinates of all the transformed points are 0 because finally the points are projected on z=0 plane.