Ethernet applies the CSMA/CD method for solving the channel allocation problem. This method works well in sensing the channel, sending frame when it is idle and also if the collision is sensed then in retransmitting the frame after a random amount of time. This results in a repeated attempt of transmission and thereby causing a delay in sending a single frame especially when the channel is loaded with traffic. This method is called a Token Bus System. Token bus system applies the physical architecture of the Ethernet system.

In the Token bus system, the stations are physically organized in bus topology but logically organized in a ring topology. A token passes by the stations. Any station that wants to send a frame must capture the token first, it must be in the possession of the token. Once the data frame is received by the receiver properly and it comes back to the sender, the sender destroys the frame and releases the free token.

In Communication Network, Token ring is the preferred architecture rather than the token bus. The token bus is limited only to process control and automation systems. The token ring also removes the uncertainty in predicting the delay of transmission of a frame occurring in an Ethernet system. 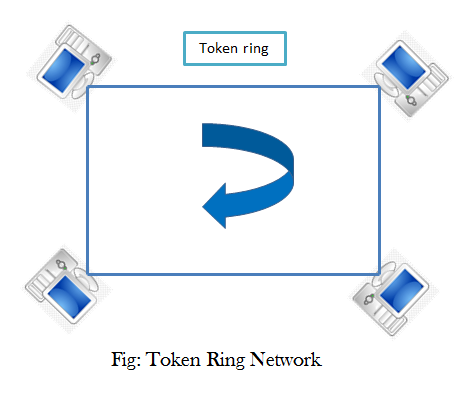 In a token ring system, a free token revolves around the ring usually in a unidirectional way. Any station can transmit only one frame when its turn comes. The basic idea behind the allocation of a shared channel in this system is called Token Passing Method. A token is simply a short frame that is passed from one station to another. A station can send a frame only if it owns the token.