The Binary Space Partitioning Tree (BSP) method is very effective in determining visibility relationships among a static group of 3D polygons as seen from an arbitrary viewpoint. 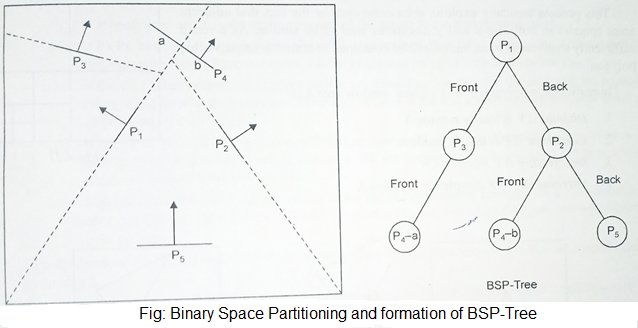 The procedure to build a BSP Tree in the object space is given as follows:
1. Select a polygon (Arbitrary) as the root of the tree.
2. Partition the object space into two half-spaces (inside & outside of the partition plane determined by the normal to the plane), some object polygons lie in the rear half while others in the front half of the partition plane.
3. If a polygon is intersected by the partition plane, split it into two polygons so that it belongs to different half-spaces.
4. Select one polygon in the root’s front as the left node or child and another in the root’s back as the right node or child.
5. Recursively subdivide spaces considering the plane of the children as partition planes until a subspace contains a single polygon.