Applets are small java programs that are primarily used in internet computing. It can be transported over the internet from one computer to another and run using the Applet Viewer or any web browser that supports Java. An applet is like an application program, it can do many things for us. It can perform arithmetic operations, display graphics, create animation & games, play sounds and accept user input, etc.
A webpage can contain not only a simple text or a static image but Java applets have begun to make a significant impact on the World Wide Web (WWW).

We can be classified the java applets into two ways –

An applet developed locally and stored in a local system that is known as a Local Applet. When a web page is trying to find a local applet, it doesn’t need to use the Internet and the local system doesn’t require the Internet Connection. 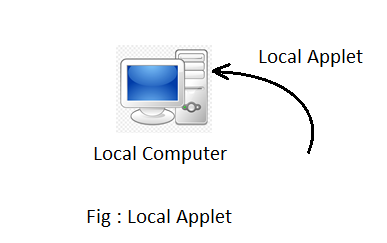